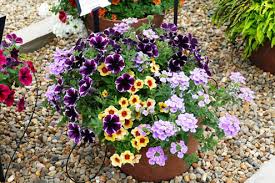 If you’re “Hotter Than You Pink,” the Montcalm Community College Ag Club can set you up with a “Marvelous Treasure” or “Caribbean Cocktail” just in time for spring.

The group is busy getting 500 hanging baskets ready for its second annual hanging basket plant sale, with proceeds benefiting the club’s agricultural projects at the college.

Bryan Hammis, of Howard City, is one of more than 20 club members helping grow the hanging baskets for the sale, as well as preparing for an April 17 greenhouse open house.

“The hanging basket project has to do with learning about the soils, irrigation, working with people – understanding that you have to work in a team to do something of this magnitude,” he said. “Everything we learned from class we’re putting into this hands-on project.”

“The students start planning in the winter, deciding on varieties of plants, discussing best practices and how to promote their sale,” she said. “Last year, they grew 250 baskets, and they learned a lot about how important it is that the entire team does their part to ensure the success of the project.”

Meyers said the group modified its approach to care and watering based on the previous years’ experience.

“Watering is a critical issue,” she said. “Because we have doubled the number of pots from last year, the group determined that they needed to develop a new system of watering. So, three of the guys got together and designed a self-watering drip system that is much less labor intense and more accurate in delivering a consistent and controlled water supply to each pot.

“It is a way to help students grow a better product as they juggle their busy schedules, and we can monitor it,” she said.

Eighteen-year-old Katryna Scheid, of Belding, said initially the group had a schedule for all watering as the starter plants began growing in smaller pots.

“We each had individual days that we were responsible for,” she said. “It helps learning the schedule and importance of properly taking care of the plants and making sure we do it on time.”

Dan Rossman, who also serves as a club advisor, said the experience of taking a plant sale from concept to completion is not something students can get sitting in a classroom.

“I think it’s priceless that they have hands-on experience,” he said. “Not only are they utilizing skills they learned in the classroom while working in the greenhouse, they do it with each other.

“It’s similar to a work environment where they have responsibilities and consequences. For example, if the baskets don’t get watered, they won’t live,” he said. “They quickly realize how important each part of the process is.

“It’s their project and they reap the benefits. If somebody doesn’t do their part, it affects everybody. They’re learning a lot about work ethic, teamwork, relying on others, problem solving and all those types of things,” he added.

Club member Nathan Schoen said he most enjoys working with everyone in the greenhouse.

“We get different perspectives from everybody. We learn from each other and all work together to make one great project,” he said. “I’m learning something new. I didn’t know anything about flowers. I’m learning about the different species, how much water they need, and the different requirements for each plant. By gaining that knowledge, I can use it down the road.”

With 12 years of experience working on a local cash crop farm, Hammis said his farming skills are being enhanced as he learns more about the marketing aspect of farming through this project.

“We are taking what we have learned in class to look at what it costs to grow a hanging basket and how we can use resources to help us spread that out over more units to be more profitable,” he said.

Seven varieties of 10-inch hanging baskets are available for $15 each or two for $25. Pre-orders are strongly suggested, and baskets will be available for pick up at the MCC greenhouse beginning May 1. For more information, contact Ag Club Advisors Merry Kim Meyers at meyersm6@msu.edu, Dan Rossman at rossman@msu.edu or Michelle Gibson at michelle.gibson@montcalm.edu.